My productivity has been pathetic during my monitoring of it for the Productivity Project and I have even struggled in producing this post about it.
The surprisingly clement weather that the has been blessed with has not helped... I would much rather be out with the dogs and my boyfriend than doing anything indoors.
Apart from yesterday, I haven’t really done any sewing, and any time I did set aside to sew was wasted by indecision and not having enough of the fabric that I had chosen for a particular pattern – the downside to only buying vintage!  I spend hours online, up to 4 hours a night sometimes, time which could be much better spent creating.
The conclusions I arrived at to improve things seem to be the same as everyone else’s, but here they are anyway:
·         Limit time spent on internet – impose strict time restrictions if necessary!
·         Focus on one thing and get on with it – I spend too long trying to decide what to start first as I have so many ideas vying for attention.
·         Plan projects in advance to avoid time wasting:
Choose fabric and pattern.
Notions needed for project.
·         Utilise any spare time, even if it’s 10 minutes, it all counts.
·         Maintain a clean space in which to work.
So, during the week after work, for just half hour to an hour, I am going to plan projects, mark fabric and cut out, so I’m ready on the weekend to sew.  I realise that when the weather is sunny, I am not likely to want to sew and I should feel ok about that.
I am imposing a moratorium on viewing Etsy, not only have I bought far too much, I spend 1-2 hours a night on it!  I pledge to not buy any dresses, patterns, fabric, pattern magazines... well, maybe one or two of those if I find them on Ebay, which isn’t banned.... yet.
Thanks, Tilly for inviting people to take part, it has helped me focus on things and hopefully will result in more productivity!  It has also been interesting, informative and enjoyable reading other blogger's posts too.
Posted by Claire at 21:43 No comments:

I don't get the interest being generated over in the US over the Royal wedding (or here for that matter)... I even had an Etsy shop owner email me to gush over how romantic and enchanting it is, just like a fairytale.  She also referred to Charles' and Diana's wedding, completely without irony ... I think everyone knows how that marriage turned out!

This article, by the magnificent Will Self, sums up my feelings on it and the Royal family in general:

At least we have gained a public holiday here in the UK due to it, so hats off to that if nothing else!
Posted by Claire at 21:04 7 comments:

I was meant to have prepared a post documenting my experience of Tilly's Productivity Project, but I've been so unproductive that I can't even manage a blog post, yet alone any sewing.  I should have it done to post tomorrow, but until then here's some more German pattern magazine eye candy to drool over.

The illustrations are to die for and I adore the colour combinations, the accessories, the SHOES, not to mention the dresses...  I have lot's more to post too, so I hope no-one is getting bored! 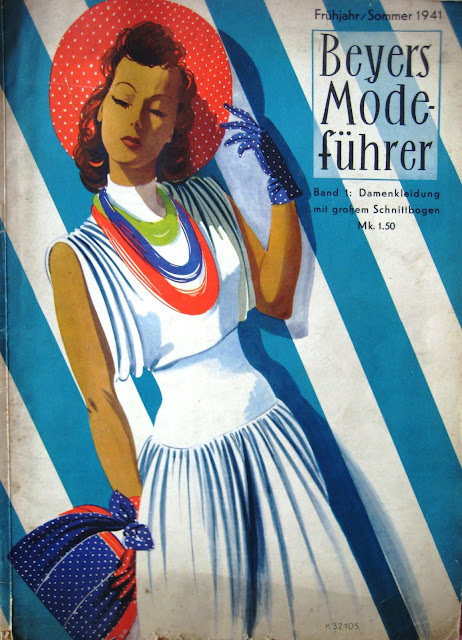 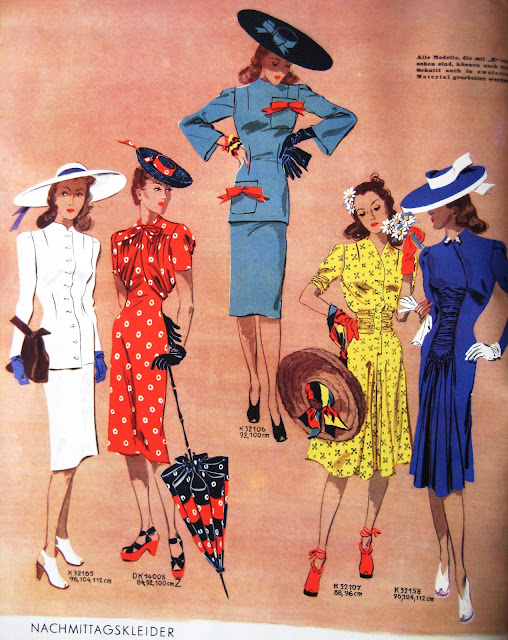 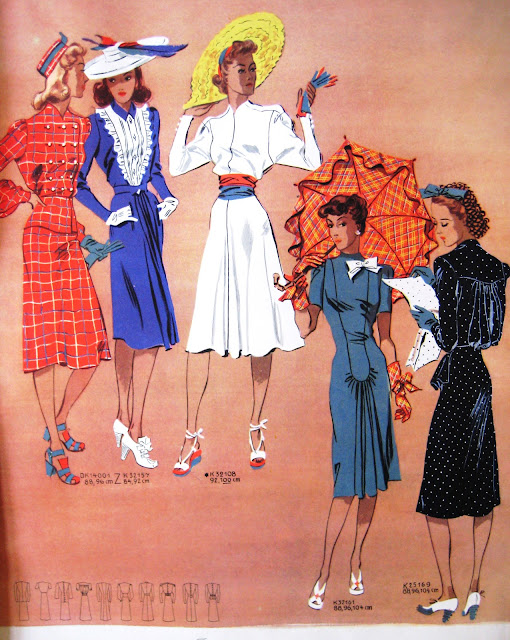 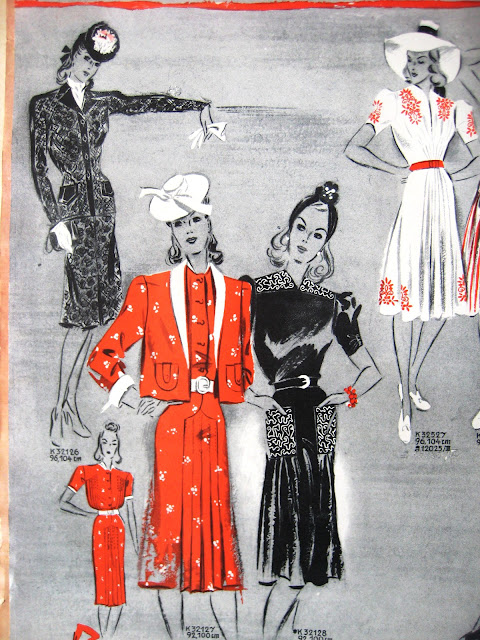 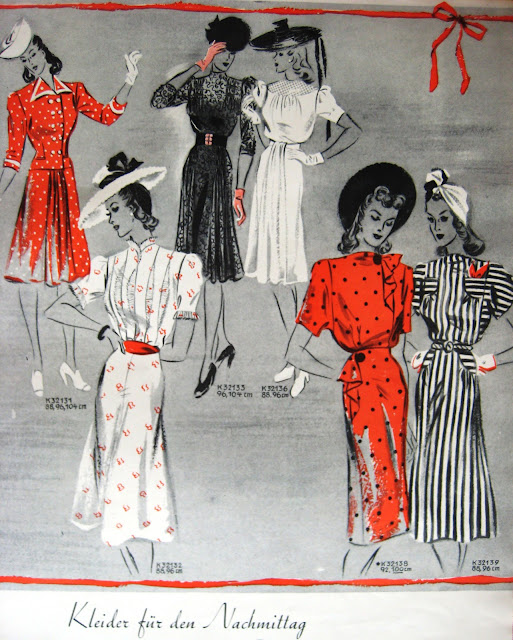 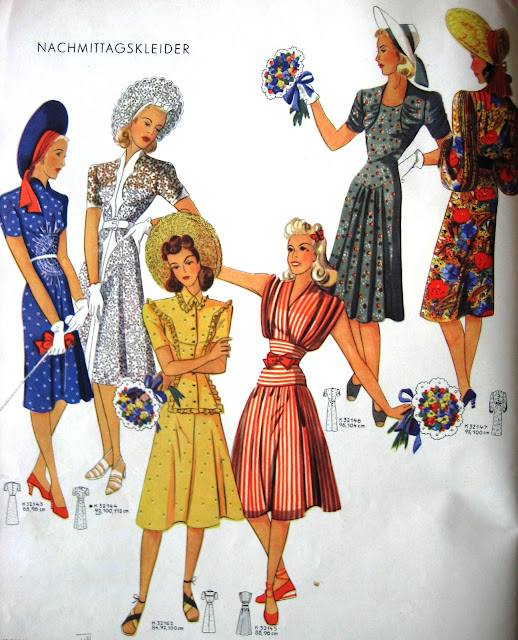 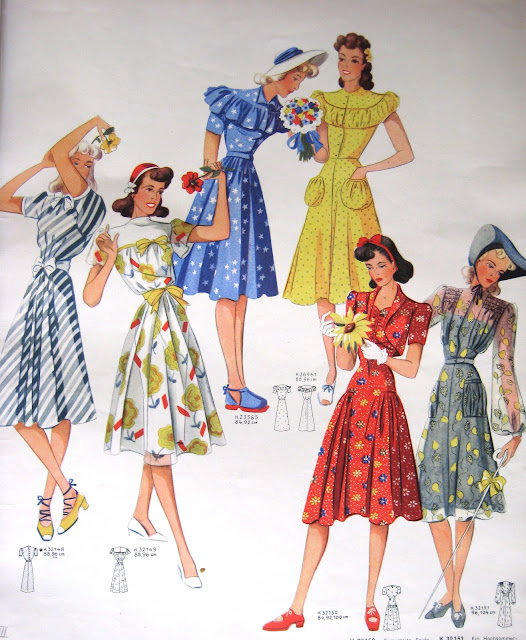 I signed up to Tilly's Sewing Productivity Project and have been keeping notes... and though there has been a lot of sewing related activities such as thinking, planning and fabric/pattern buying, there hasn't been a lot of actual sewing.  Well, NO sewing would be more accurate.  I hope with a 4 day weekend,  that I will start something and stay away from the pub (a hangover pretty much puts the kibosh on doing 'owt at all).

Anyway, more of that later, here are some more (sloppy) scans of Beyers Moden May 1938, this magazine contains every pattern pictured in it! I adore the 9th and 10th pages and have already traced the white & colour print dress with large pockets (meant to be a beach cover-up I think) and the white dress with blue and red straps: 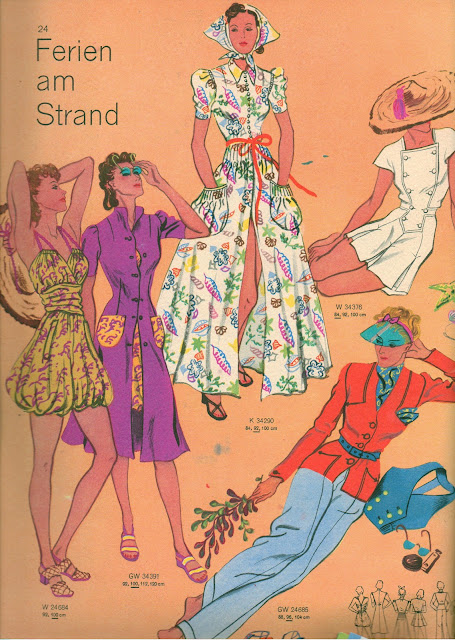 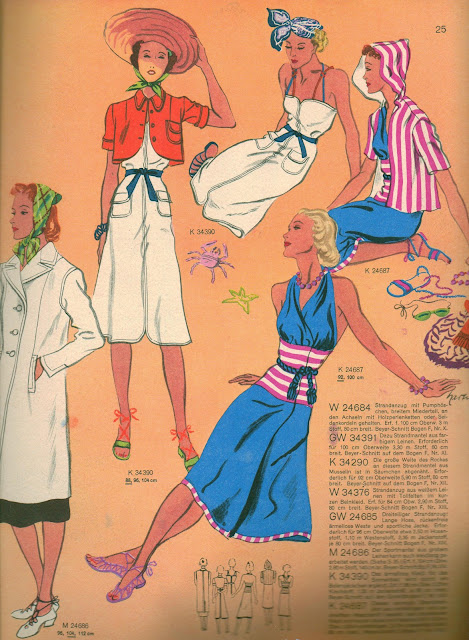 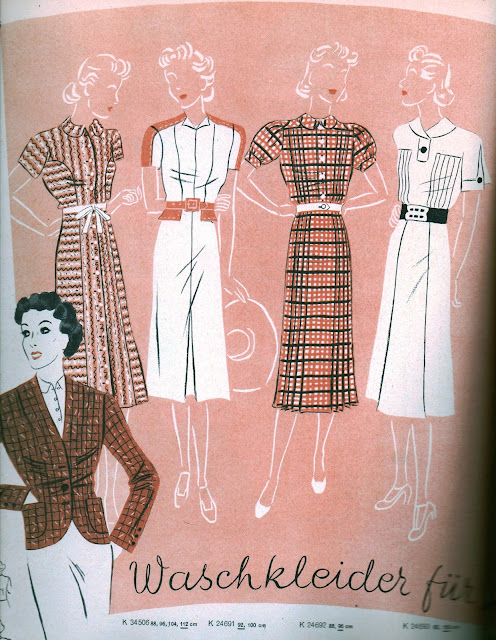 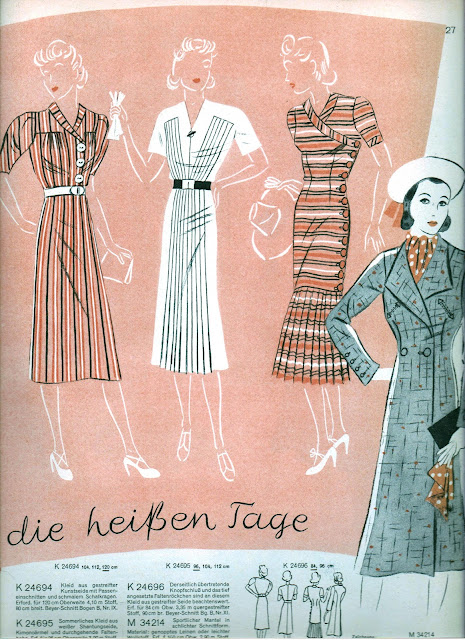 I'll upload more images at my Flickr
I have 2 more of these magazines on their way... so once I get those I will be selecting some of the best patterns in various sizes and offering a giveaway - whoever is randomly picked, I will trace the pattern of their choice.  Believe me, that is no small task!
Posted by Claire at 09:26 6 comments:

I have been tagged/awarded 'I'm All That' by Marie, from the rather lovely A Sewing Odyssey, thanks!

Here goes:
﻿
1. What size shoe do you wear? If you wear a size 7, can I borrow your shoes?
I’m a 6, Euro 39, no idea what that is in US… 7-8 maybe?  I wouldn’t be fussed on loaning any of my shoes, and as most of mine are wrecked from spilled booze and hard dancing, then I doubt you’d wanna!
Since breaking my ankle recently (an unfortunate incident involving the aforementioned booze, dancing and a pair of heels…) I have gone shoe mad, as I was only able to wear one at a time… I still can’t wear heels yet, but once I’m able these beauties are awaiting me in my wardrobe:

2. 30s or 60s
As much as I like the early to mid 30s (especially the fabrics and details), I especially love the late 1930s, very flattering length and fit, and I’ve recently gone mad buying pattern magazines of this period (see my last post!).

I also love the 60s too -   I like mini dresses, a-line styles, bright & bold patterns, dolly dresses and the late 60s styles were fab….  I’m basically a whore when it comes to eras, and could probably find something to like and wear from every decade from the 1920s through to the 1970s.

3. Have you ever kissed someone you shouldn't have?
Yes.
4. Have you ever been poisoned? Was it by the girlfriend of the person you kissed? That is awesomely "Knot's Landing”.
No.  I would never be involved in anything that was as tacky as a storyline from Knot’s Landing…. (who wrote this question??!)
5.Who's on your "Celebrity Free Pass" list (top 5)?
Ok, I’d have to time travel for some of these:
Al Pacino, circa 1979 (dreamy in Dog Day Afternoon) up to about 1990:

Johnny Depp, anytime at all… :

Johnathon Schaech, circa 1995 when he made Doom Generation even though he spells his name like a pretentious tosser... :

Prince, then, now, forever… though he would be BANNED from speaking, as he’s bound to mention God and being an atheist it would really turn me off. Also, while looking for an image for this, I did notice he’s beginning to look a bit like a middle aged woman…. Hmmm, maybe we’ll say up to 2000:

At the risk of being a cop out, I’d like to pass this onto all of my followers (those of you that haven’t yet been tagged) as I can’t pick just 6!
Posted by Claire at 16:23 No comments:

I shouldn’t shop online with a hangover.  The rational part of my brain that reins in my urge to spend too much money seems to fail, and before I know what is happening, I have impulsively bought something too expensive that I would never normally .  Or three things.  The upshot of this though, is I now have three DIVINE late 1930s magazines, WITH patterns!
Here are just a few pages:

I was hopeful when they arrived that I wouldn’t be disappointed and boy, was I not, I nearly wept with joy and some of the dresses are making me feel giddy!
Unfortunately, acquiring these has increased my uncertainty of just what to make next.  Plus, I have no hangover excuse for the other 3 similar magazines that I found and bought in an obsessive ebay/web hunt yesterday!

I have at least begun tracing a pattern from one of the insanely confusing pattern sheets, so hopefully there will be some sewing happening soon.

Claire
Newport, South Wales, United Kingdom
Trying to think of something to say about myself, I came up with these five things (in no particular order): Atheist. Procrastinator. Sewer. Vintage Lover. Vegetarian. Three of them are relevant to the subject of this blog, two aren't really at all.